His Grace, Harbinger of the Last Covenant, Prof. Iyke Nathan Uzorma, (Professor of Noetic Science, great Scholar of Extra-terrestrial Research and Apostle of Christ in our time) is one whose conversion testimony has changed many lives in different parts of the world. His conversion represents one of the foremost manifestations of the Power of Jehovah God and His Christ in this generation of men.

An insider look at the Bethel Supernatural School of Ministry, including their „Christian“ divination cards; grave soaking; impartation of spirits; anointing; and more.

In this video, we review an animated Barbie video teaching children how to do yoga. We will look in-depth at what these postures mean, and we will see how yoga poses are actually worship postures devoted to the gods of Hinduism; entities the Bible calls demons. One posture is intended to mimick Shiva cutting the head off of Daksha and putting in on a stake. Yoga is not something Christians, or anyone else, should be practicing.

Andrew Strom has re-ignited concerns which have surfaced periodically since the time of the Toronto Blessing in 1994. The outspoken New Zealand preacher has written a book entitled ‚Kundalini Warning‘ which suggests that false spirits are invading the church. 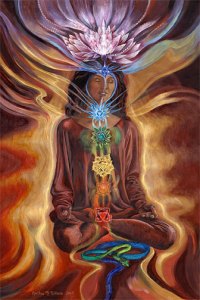 I researched the New Age Movement (and its associated eastern spiritualities) back in the late 80s/early 90s and spoke, (by invitation at that time) to many church groups on the subject.
Awakening the Kundalini is the expression used by mystics,  Hindu gurus and New Agers for the practice of focussing on a ‚serpent spirit‘ which, they say, resides in each one of us in the form of a coiled snake located at the base of the spine. Through meditation and physical body positioning the aim is to ‚raise the Kundalini‘ through a total of seven spiritual waypoints – called ‚Chakras‘ – located along the spine.

The aim is to elevate the Kundalini spirit to the ‚Crown Chakra‘ which is located at the top of the skull. Those who have gone through this process have described it as ‚mind-blowing‘.
I threw the ‚best‘ book I had on the subject into the waste bucket as I didn’t want it in my home, and I wouldn’t want to quote from it in this article anyway.

The practice, which is spiritually dangerous in the extreme, is often linked with Yoga-like exercises associated with eastern meditation and mysticism. Chanting and essentially self-hypnotic routines can be a ‚way in‘.

Andrew Strom believes that these phenomena – stretching back to the Toronto Blessing – represent the ‚worst invasion [of deceiving spirits] in church history‘ and, in his concern, goes as far as controversaly ‚naming names‘. It is up to the reader to exercise his/her own discernment on all that is contained in the following. 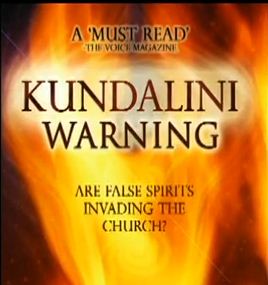 I just saw the video of Rick Joyner announcing that Todd Bentley is back ministering every night at Morningstar in North Carolina and now they have so-called „revival“ manifestations eerily similar to Lakeland. They also announced that they are streaming these big meetings every night on their new TV channel – and they are greatly promoting the whole thing.

Now I am a tongues-speaking Pentecostal myself – but can I ask a simple question here please? What kind of „spirit“ was it operating in the Lakeland revival – when the leader and main focal- point of the meetings (Todd Bentley) was having an adulterous affair behind the scenes? Was it truly the „Holy“ Spirit that was anointing something so sensual and unholy? And now that Todd divorced his wife and married his mistress – are we supposed to welcome him back and this „anointing“ with him? What is going on here? Rick Joyner has been warned very specifically by high- level ministries not to do what he is doing now – bringing Todd Bentley back into the limelight. And yet it seems he does not care. Apparently the „manifestations“ are all that matter.

Steven Bancarz shares the dangers of the New Age movement on this episode of Something More. New Age has infiltrated our culture through practices such as yoga, meditation and crystals, as well as beliefs such as reincarnation. Many Christians have unknowingly participated in these practices and come into agreement with demonic powers. Steven Bancarz sets the record straight on the New Age and directs believers to the truth of God’s Word.

Steven Bancarz joins Josh Peck and Donna Howell to discuss how to witness to people trapped in the New Age movement.